The WBD Million Makers team won The Above and Beyond Award at The Prince's Trust Million Makers North of England Regional Final (13 February), sponsored by Ascential, which was held at The Marriott Hotel, Leeds.

At the event, it was announced that the teams competing in the North of England region raised more than £130,000 for The Prince's Trust, which will go towards supporting young people in the UK to turn their lives around. The Trust helps young people to get their lives on track and empowers them to be able to live, learn and earn.

The WBD Million Makers Team was made up of a group of trainee solicitors based across the firm's UK offices. Over a period of six months, from July to December 2018, the team organised a number of innovative fundraising events and activities to raise as much money as possible for The Trust.

The team had a target to raise at least £10,000, but exceeded this by raising nearly £19,000. The Above and Beyond Award recognised the team's remarkable commitment, determination and passion to the competition.

"The Prince's Trust is one of our primary charity partners, and its values and mission fit squarely with our commitment to supporting disadvantaged individuals in the areas of education, employment and entrepreneurship; our three E's which make up the firm's Responsible Business focus.

I am delighted that our Million Makers continued to exceed their business plan targets throughout the process and I would like to thank them all for their hard work and dedication to raise money for such a great cause. We look forward to continuing our work with The Prince's Trust in the near future."

"On behalf of The Trust, I want to say a heartfelt thank you for all the commitment that the Womble Bond Dickinson Million Makers Team have demonstrated to transform young lives. They have been part of fundraising an impressive amount across the North and should be proud of their achievements. It has been a delight to work with the team, and see them grow and develop skills throughout the challenge. I would also like to thank WBD for its continued support."

In the build-up to the fundraising, The WBD Million Makers Team's business plan was recognised by The  Trust as 'one of the best they have seen'. At the Regional Finals, Frances Tait and Katie Robinson were also named runners-up for the Outstanding Individual Award, in recognition for an exceptional contribution to both their team and the competition.

WBD has been supporting The Trust since May 2013. The firm is also heavily involved in a comprehensive Responsible Business programme, supporting a number of charities across its eight UK offices including St Peter's Hospice, Jeremiah's Journey, Southampton Sholing Salvation Army, Leeds Mind, Greenwich Legal Advice Centre, Percy Hedley and Social Bites, to name a few. 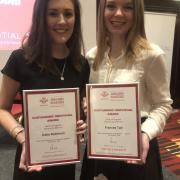