Year One of Trump’s DOJ: An Overview of the Four Major Categories of Offenders Skip to main content

Year One of Trump’s DOJ: An Overview of the Four Major Categories of Offenders

This article is the second in a series analyzing the Sourcebook of Federal Sentencing Statistics for Fiscal Year 2018, recently released by the United States Sentencing Commission. As discussed in our first article, the Sourcebook revealed an increase in the overall number of federal criminal offenders from the numbers seen in FY2017 – the first increase in offender numbers since FY2011. (See here and here for our previous analysis of the national numbers.) In this article, we discuss how the FY2018 offenders can be categorized by type of crime and what those numbers reveal about the prosecutorial priorities of the U.S. Department of Justice during its first full fiscal year under the Trump administration.

Click here* to read a disclaimer about the data contained in the FY2018 Sourcebook.

In the FY2018 Sourcebook, the Commission breaks out the offenses committed into thirty different categories by type of crime. Of these thirty categories, there are four categories that make up over 80% of the total number of offenders. These categories in FY2018 were immigration, drugs, firearms, and fraud-related financial offenses.

Immigration offenses include unlawfully entering or remaining in the United States, alien smuggling offenses, and offenses related to passports, naturalization documents, and other entry documents.

Firearms offenses include the unlawful possession, transfer, or use of firearms, ammunition, and explosive materials.

Here is a breakout of the numbers for these categories in FY2018, as a percentage of the total national caseload:

Here is an overview of some of the FY2018 statistics for the four major offense categories described above:

After four years as the second largest offender category (behind drug offenders), immigration offenders made up the largest part of the FY2018 federal criminal caseload, with 23,883 offenders. Immigration offenders as currently defined by the Commission represented 34.4% of the national offender numbers in FY2018, an increase from 30.5% in FY2017. The increase in immigration numbers during FY2018 was the largest increase within the four major categories. As we noted in a previous article, DOJ has announced that immigration prosecutions are a high priority.

The Commission recently released an interim report detailing statistics from the first six months of FY2019. This update shows that immigration offenses have continued to increase since FY2018 – 37.2% of the total offenders sentenced during the first half of FY2019 were immigration offenders. 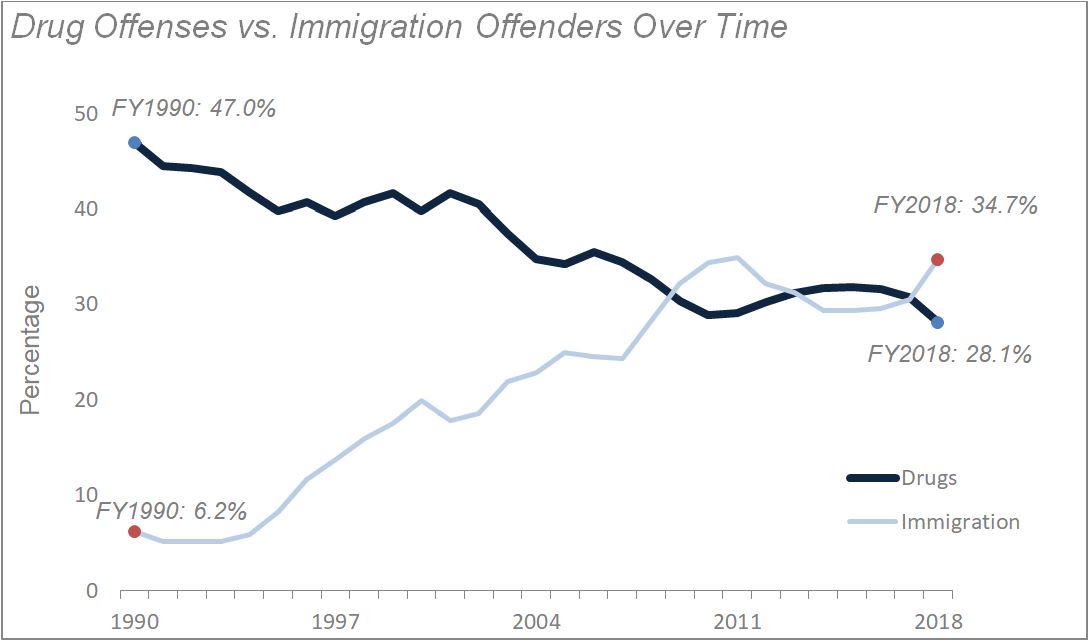 This is not to say that there are fewer drug offenders than there used to be. To the contrary, the FBI reported that there was a 3.8% increase in drug arrests during FY2017 compared with FY2016; according to the FBI’s Uniform Crime Reports from FY2013-2017, drug arrests have also increased three out of the five previous fiscal years and increased during the first half of FY2018 when compared with FY2017. So the decline in the number of federal drug offenders does not mean that drug prosecutions as a whole have declined – just that more of them may be handled in state court than was previously the case.

The Commission also provides a breakdown of drug offenses based on the type of drug involved. Here is how the FY2018 drug offenders break out by drug type:

Included in the 8.1% of other FY2018 drug types not represented above are oxycodone/oxycontin (2.4% of offenders) and fentanyl (2.3% of offenders). The Commission first reported on fentanyl trafficking in FY2014, when there were nine of these offenses. Since FY2014, the number of federal fentanyl offenders has increased more than forty-fold; federal fentanyl offenses are apparently still on the rise, as the interim report shows that 3.8% of federal drug offenses during the first half of FY2019 involved fentanyl as the primary drug type. During FY2018, DOJ named a Director of Opioid Enforcement and Prevention Efforts and announced Operation Synthetic Opioid Surge (S.O.S.), a program designed to increase prosecution efforts in fentanyl and other synthetic opioid cases. This increase in fentanyl offender numbers is a product of this new enforcement emphasis.

Fraud and related financial offenses : Offenders committing fraud and related financial offenses made up 9.5% of the FY2018 offender caseload. This figure represents a decrease from FY2017 numbers, when fraud offenders made up 10.5% of the national caseload. FY2018’s overall fraud offender numbers were the lowest reported since FY1990 and represent the all-time lowest reported percentage of the overall offender numbers. The FY2019 interim report shows that the decrease in fraud offenders is likely to continue – for the first half of this year, 8.8% of the total national offender caseload involved fraud offenses.

The statistics in the FY2018 Sourcebook (as well as those from the FY2019 interim report) show DOJ’s increased focus on prosecuting immigration and firearms offenses and a continuing decline in federal drug and fraud prosecution efforts. For a closer look into some of the statistics within these four categories, click here.

Our next article will offer a more in-depth look into statistics about immigration offenders from FY2018. Please let us know if there are particular types of analysis you would like to see.

*The Sentencing Commission announced in the FY2018 Sourcebook that it changed several methodologies in its statistical analyses of federal criminal offenders. One change it made was how it categorized offenders by the type of crime. Previously, the Commission used the statute of conviction to determine the type of crime; the count of conviction with the highest statutory maximum drove the primary offense category. For example, if an offender was convicted of a drug offense and a related firearm offense, the offender was categorized under the firearm offense since that crime has a higher statutory maximum penalty. With the FY2018 statistics, though, the Commission has moved to using the sentencing guideline with the highest offense level (how the federal courts classify crimes according to the severity of the offense) to determine the type of crime.

For the FY2018 Sourcebook, the Commission also recategorized the FY2017 offender numbers using this change in methodology. This retroactive change produced notable differences in some of the offender numbers. For example, the change resulted in an increase in the number of offenders categorized as having committed federal murder offenses during FY2017 from 72 to 354. The largest change came in cases with firearm offenses; the FY2017 firearms offender numbers dropped by over 1,300 offenders after the recategorization. This dramatic change was largely due to the recategorization of offenses involving the use or carrying of a firearm while committing another crime (such as a drug trafficking crime or a crime of violence); previously, those offenders were categorized as having committed firearm crimes, but they are now categorized in connection with the underlying crime of conviction to which the firearm crime was connected. Whenever we specifically refer to FY2017 data, we are going to use the recategorized data found in the FY2018 Sourcebook.

Notably, the Commission only provided recategorized numbers for FY2017. As a result, it is often not possible to make direct comparisons of FY2018 statistics with those from earlier years that were not produced with the current methodologies. In this article, we discuss the crimes contained in the four largest offense categories. Of these four major categories, however, only firearms had a marked shift under the new methodology; the other major offense categories did not have the same level of disparities. The FY2017 immigration offender numbers, for example, only increased by 0.4% from 20,421 to 20,496 offenders after the recategorization. Given the smaller changes seen in the immigration, drug, and fraud offense categories, we are comfortable noting the change in methodology and continuing to compare FY2018 data with that of years prior to FY2017 (the most recent year with the recategorized data). For those earlier years, it is admittedly not a perfect comparison, but it will still illustrate the general trends we are seeking to describe here. We also note that, in the FY2018 Sourcebook, the Commission often makes generalized comparisons of FY2018 offender numbers with offender numbers from previous years. So we are following suit with their approach.

More information on the recategorization is available on pages 28-31 in the Introduction to the FY2018 Sourcebook and in the section of Appendix A (the descriptions of datafiles and variables) addressing how the Commission defines the types of crimes. Thanks very much to the Sentencing Commission’s Office of Research and Data for its time and effort in providing additional insight into these changes.

Click here to return to the text of the article.