Year One of Trump’s DOJ: Drilling Down Into The National Numbers | Womble Bond Dickinson Skip to main content

Year One of Trump’s DOJ: Drilling Down Into The National Numbers

Here’s a closer look at some information underlying the national statistics from the 2018 Sourcebook of Federal Sentencing Statistics. (Click here to go back to the main article.)

As noted in the main article, there were 69,425 federal offenders who were sentenced during FY2018. The districts in the Fifth Circuit – one of the twelve regional federal judicial circuits with criminal dockets – represented the largest share of offenders, with 25.4% of the total number of offenders. The Ninth Circuit (which includes districts from Alaska, Arizona, California, Guam, Hawaii, Idaho, Montana, Nevada, the Northern Mariana Islands, Oregon, and Washington state) had the next largest group of offenders, with 19.5% of the nationwide total. 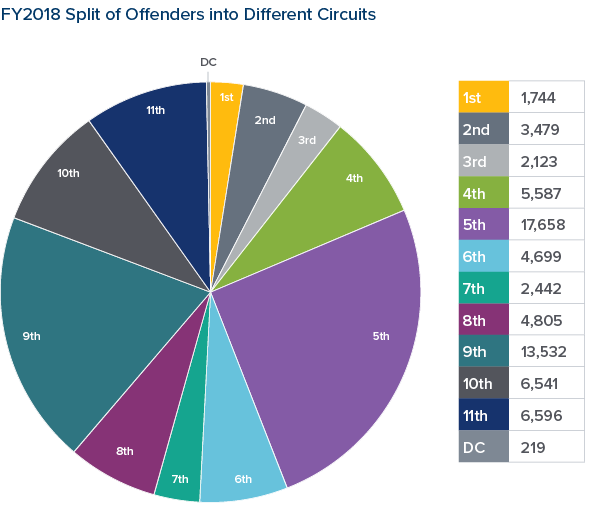 We plan to offer a bonus article that includes more detailed statistical analysis with the publication of each main article about the data from the FY2018 Sourcebook. Please let us know if there are particular types of analysis you would like to see.